Click on the link below to get the book, and the FULL story about the entire adventure!


I traded one cube van for one recording contract with Brendan.

Included in one recording contract:
1. 30 hours recording time
2. 50 hours mixing/post
3. Transportation to/from Toronto from anywhere in the world
4. Accomodations in Toronto.
5. You album will be pitched to executives at Sony-BMG and XM radio

Here's some pics from our trade: 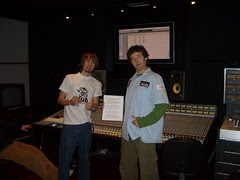 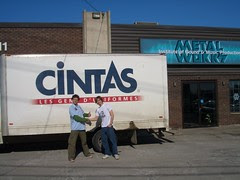 In order to make the trade official, I had to sign the contract with the left-rear tire of the cube van, of course.  Brendan held the contract while the van rolled forward.  I'm so glad I didn't run over your fingers Brendan. That would've been so not cool. But then again, the footage would've been amazing.

Yep, it's even on paper. Here's what it looks like: 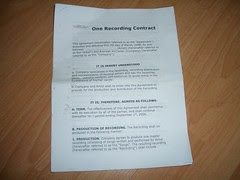 Wanna see who I traded the
recording contract with?
Click here.

This is just amazing! I'm really enjoying your site and following the trades. Wish I knew someone who wanted a recording contract. Can't wait to see what happens next.

hey man great work on everything, i think this is one of the most inspirational sites out there on what you can do with so little... i mean if we dropped 1 billion red paper clips in africa then everyone could have a cube van to sleep in at night. But yea, with the record label i think youv lessened your audience cause only bands can barter now and may hav little to offer (as bands usually do) or maybe youll get some rich guy wanting to record some really really bad music who will trade you a small island or something... who knows.

i'm sure william hung wouldda killed for this. hey maybe you'll get some pop idol failure snatch this up. find one who owns a harley, then you're set.

Woah, you're gonna get alot for this...

Still keeping an eye on your progress Kyle... Just posted your lasted trade on my site... Best of luck dude...

Hello my names Pania and I live in New Zealand, what a permo thing to think up I bet your gonna go world wide! Keep up the good trading.

You didn't mention where you want the house to be and if given a house do you cover transfer taxes, gst if the house is in canada etc?
I am too lazy to log into Blogger..you can reach me at sweetloyalnfun@yahoo.com

My sister would probably kill for something like this. I just emailed her about your little adventures and I am waiting to see what she thinks. Maybe, just maybe she'll have something to offer you for that recording contract. I guess we'll see.

I will offer you the most prestigous school in england for your brain.

You bring back my faith in the creativity of human race. Not only you are taking care of yourself but you are bringing thousands of people closer together in a wonderful and fun way. I am so glad for you and your parents should be very proud of your genious idea! Congratulation

Hey Kyle, I was reading up on Strange News on Comast.net, and saw the article on you. I think you have a great idea here, it is kind of like the "Pay it Forward" method. There should be more people in the world like you. Keep up the great idea, maybe someday I will have something to trade to you.

You are unbelievable. I think this is amazing and I wish you all the luck on reaching your goal. I'll keep checking in to see if there's anything I can do to help.

Man these thing are amazing.

Really cool idea and I'm thrilled to see the world community getting together and supporting people with a great idea and a way of making the world smaller.

Yo u are awsum i cant beleive what you did. dude i hope you get a house. maybe one day you can trade this stuff for brains and give them all to people who didnt think of this.
p.s. cant wait to see your house
from,
a 12 yr old kid

It is a great idee! I want do it to. Great idee!

Im hooked!
You got me
silly and original
breath of fresh air
silly hare
stay free
a newly adjoined me
happily
gigglingly

My sides are splitting, I am hurting with laughter and my teeth are sticking out!!!!!!!!

one paperclip to rule them all, one paer clip to find them all, and in the darkness bind them ....into a freakin house ...sorry tolken... couldent resist the conotation

one paperclip to rule them all, one paer clip to find them all, and in the media light bind them ....into a house just like that...sorry tolken... couldent resist the conotation

winks and saysd i want to buy the paperclipi smell a value here with a certificate of authenticity of course lonewolf_without_moon@hotmail.com

Did'nt that idea start with the great deppression? WOW,for all the people who feel they have to sweat like a pig to get some of the things they want!
nah, nah ,na na ;-p

Metal Works is the highest end recording studio, and recording/producing school in Canada. That is insane man. I'm attending that school within two years!

hey im kevin and i think its awesome kyle that u got that far. im wondering, since its the first time ive been on ur site, if u made any other B.O.B trades since u got the house? email me at papasmurfyh@yahoo.com w/ details thx

PS:dom and dan u guys are awesome!

Gosh! I can't believe you got to exchange a recording contract to METAL WORKS - they're one of the best studios in the whole world!!! your experience is MIND BLOWING man... kudos to you!!!