The One Red Paperclip Project

On July 12, 2005 I posted a picture of a red paperclip on my blog and in the barter section of craigslist and asked if anyone wanted to make a trade for something bigger or better.  A few days later I traded the paperclip for a pen shaped like a fish.  Then I traded the pen for a doorknob.  And so on, each time trading for something bigger or better.  Once all the dust settled, I'd made 14 trades and wound up with a house located at 503 Main Street in Kipling Saskatchewan.

It was an amazing year.

How did I trade up to a house in a year?  It's a long story, and inside the house in Kipling I sat down and wrote an entertaining book about the whole adventure, with plenty of behind the scenes and never-been-told-before stories!  It goes a little something like this:

The book is available in 14 languages from Estonian to Korean.  There's even an English version!

Looking for a unique motivational speaker?  I've told the red paperclip story to thousands of people at conferences, corporate events, and universities around the world.  For more info about the one red paperclip presentation, please click here.

Over the year of trading I met hundreds of awesome people, made many new friends and tried out new things.  You get the idea.  The experience was incredible.  Some of the more ridiculous highlights:


Everything has to start somewhere, and the most important trade was the first, when I traded away the red paperclip.  If I hadn't tried the idea out, I'd just be a guy with a red paperclip on his desk and the adventure would've never happened. 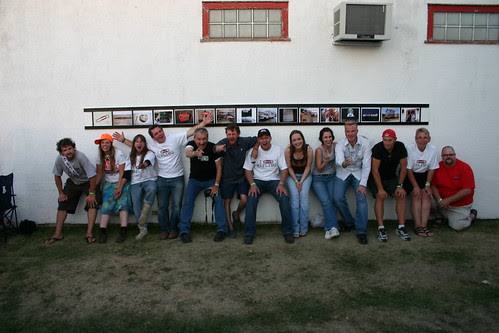 I have since donated the house to the Town of Kipling, where along with the World's Largest Red Paperclip, it is a major tourist attraction and community asset.

Email ThisBlogThis!Share to TwitterShare to FacebookShare to Pinterest
Home
Subscribe to: Posts (Atom)
Welcome to the official home of One Red Paperclip Inc.
"We sell things you can buy™"
For more information on bringing Kyle MacDonald to your event, please contact:
514-833-3980 | speaking -at- oneredpaperclip.com