Hey look! There's a video of this trade! 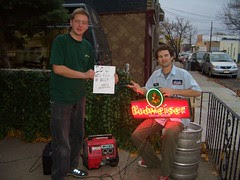 Marcin gave me an offer for the red generator I couldn’t refuse:

one beer keg
one neon Budweisier sign
one I.O.U. for a keg’s worth of beer.

Add it all up and you’ve got ‘one instant party.’

After a major snafu with the red generator on Tuesday night, I managed to reschedule the trade with Marcin in Maspeth. Around 4pm, Dom and I drove over the Williamsburg Bridge and found our way to Marcin’s place.

I plugged the neon Budweiser sign into the generator, pulled the cord and we watched the generator roar to life. Marcin switched on the light, it lit up – powered by the generator. We looked at each other, shook hands and sealed the deal.

Marcin spends most weekends out in the country, and will put the generator to excellent use – that you can be sure of. He’s followed one red paperclip right from the start.

Marcin set a major precedent for all future trades. He traded an I.O.U. worth exactly one keg of beer. That means, whoever gets ‘one instant party’ will have the keg filled with the beer of their choice, courtesy of Marcin. An I.O.U. for beer is a liquid asset on so many levels. 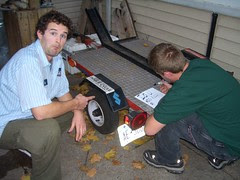 This was a landmark trade, not just because of the intricacy of illuminating the neon light off of electricity from the generator or the fact that I am now in the I.O.U. zone, but because ‘one instant party’ has the potential for so much fun.

Before anybody out there says it, I’ll say it myself: the items that make up ‘one instant party’ are probably not worth as much as one red generator: Marcin got an awesome deal.

And fun is priceless.

By the way, I spray painted the keg red. It had to be done. 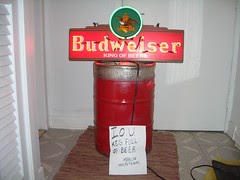 The other night after I realized the red generator was confiscated by the FDNY, I had a revelation. As I frantically searched lower Manhattan for the confiscated generator, I fully expected that I was going to be hit with a $500 NYC bylaw fine for a serious offense like ‘causing a fire hazard’ or ‘awakening hotel guests with something other than loud rock music’ or ‘searching too frantically for a missing electrical generator’. At this point in my mind, the generator was not an asset. It was a liability. I didn’t have $500 to bail out the generator.

I’ve had loads encouragement from many residents of blogland who want to see me complete the series of trades up to a house. I want nothing else than for this to happen. In fact, with all the help I’m getting, I feel that we’re in this together and that if I don’t get up to a house, I’ll let you down. Bartering up to a house is going to be fun. It is going to be rad. It will rule. When I get the house, you will all be invited over. But for me to barter from one red paperclip to one house, a paradigm shift needs to occur.

Definition of Paradigm Shift from somewhere google took me: “A complete change in thinking or belief systems that allows the creation of a new condition previously thought impossible or unacceptable. (ex.- the change in thinking created by Just-in-Time that views inventory as a liability, not an asset)”

Now I’m not saying that the whole barter from one red paperclip to a house concept needs to be Fixxed, it’s just that I’ve come to learn that One Thing Leads to Another and that each trade I make has a massive repercussion on what future trade offers will be, whether I make a subtle random unnecessary reference to a new wave pop song from 1983 or not.

What I’m saying is: I need to think outside the paperclip.

With the vast amounts of funtential stored within ‘one instant party’, the project can no longer be called just one red paperclip:

This is one red paperclip 2.0

ORP 1.0 = limited to bigger or better objects, like ‘The World’s Largest Hockey Stick’

ORP 2.0 = the same as ORP 1.0 but also includes things like ‘Guest host spot on the Tonight Show'

(**Don’t get me wrong here, the entire project will revert back to a pure, only object-oriented ORP 1.0 style if you or somebody else can hook up a sponsorship from a massive freight company like UHAUL or CHINA SHIPPING LINES or NASA that will pick up all freight charges plus the occasional city bylaw snafu along the way. (I don’t have room for The World’s Largest Hockey Stick in my apartment, but I will make some if it comes up for trade.)

What I’m trying to say is that I want to spend more time actually trading things and less time improving them and searching for trade offers. It took 53 days to trade the generator. 53 days is WAY too long. 53 days is not fun, 53 days is boring. 53 days is so one red paperclip 1.0

I appreciate the dozens of offers for vehicles that only need a few new parts to get them back on the road – parts like ‘left side rear-view mirror’ or ‘shifter knob’ or ‘entire new drive train and frame-straightening’ – but what you need to understand is, I don’t have any tools. I’ve got a hammer, some scissors, a Swiss Army knife and a few rolls of duct tape. Unless you can provide the garage, the labor and the parts to fix the vehicle, then a handful of rolls of duct tape isn't going to make the vehicle any easier for me to trade for something else. (If you have an original General Lee, in any condition, please disregard this paragraph)

I’m really excited about this. This is such a big step in the right direction - the direction of awesome.

I think you missed one thing: Marcin did not get a better deal. Sure, the generator is worth more, but who can put a price on "instant party" and time with Kyle? As someone who has spent time with Kyle, and alcohol, I'm telling you, you want to chill with this guy - you'll get abs.

Been readin all over the place about this project. I will be following all the fufn as well now...let's raise the fun level yeah!

It is amazing how your adventures make me happy!
By the way, for a fun time, sit in the Espace Jeunes at the new Library in Montreal, across from the bus terminal and watch the elevators. It's like they are straight out of Hitchhikers Guide to the Galaxy! I've never heard happier elevators!

thought you would enjoy!

Will you have to spray paint the house red, too?

I am sorry I don't like your new site. The old one was so much easier and funnier to read. Good luck with your quest to trade up for a house. I think you are going to make it. Good Luck...

this is the coolest idea ive ever heard of! you are so gonna get a house! i only wish i had something to trade you!

Original. I must say. My blogs aren't doing as well as your paper clip. By the way. Where is the red paper clip now?

I need to figure out how to trade my student loan.

You could through an "instant party" with the free beer and have people bring items to trade you for entrance into the party. Maybe you could give the sign to the best barterer or have a seperate raffle to give away the sign and/or keg. Of course the raffle tickets would be bought with bartered goods.

This would also make for a fun story.

Innovative idea and clever story, good luck, but I have quest:have you house target or you will continue to other new target...

alternatively, paradigm shift can be defined as "a blog written by my friend nathan." who coincidentally, looks slightly like you. maybe i could trade him for you? you know, bigger, better? well, just bigger so far as i know, and maybe better. i dunno, nathan is pretty crazy.

check out his blog at http://paradigmshift.modblog.com :-D

good luck with your house

Here's hoping your dream comes true !! I'm sure it will.

u sould of cept the keg and got a job

This is soo freakin rad!!! My roomate mentioned you after i made a comment about Johnny Lechner (a 12 year under grad student), another great man. You have a new fan, keep us posted.

WHAT A GREAT STORY,FOLLOW YOUR DREAMS I LOVE IT.WAY TO GO GOOD LUCK ALWAYS
DEBORAH

amazing what will power and thought can do