The Best Slam Dunks OF ALL TIME. 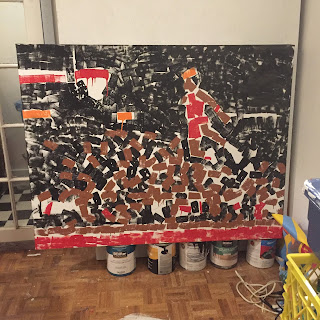 Watch the 2016 NBA Slam Dunk Contest it if you haven’t already.

Aaron Gordon with the Best Dunks in History.  For real.  Over the mascot under the legs windmill?  360 windmill reverse ball snatch from arm of mascot rotating on hoverboard?  Are you kidding me?  Insanity. 100% athletic prowess and insane cultural zeitgeist showmanship.

Contest winner Zach LaVine threw down arguably more technically adept dunks and his athletic ability was completely on par with Gordon (maybe even better) but as amazing as LaVine’s dunks were, I can’t get the image Aaron gordon feet in the air ABOVE the mascot out of my head.

Which brings us to today’s auction, the most iconic photograph in slam dunk contest history: Michael Jordan’s foul line dunk at the 1987 Slam Dunk Contest.

Jordan’s foul line jam was an amazing dunk.  Like larger than life great.  But arguably more amazing than the dunk itself was the spectacle and marketing imagery that followed. Every Single Shoe Store on the Planet from 1988 - 1992 had the Jordan Foul Line Dunk poster on its wall.  Every boy between the ages of 5 - 15 had that Jordan poster on his bedroom wall.  Every school locker was plastered with it.  The nerds had it.  Girls had it.  It went way beyond sports and marketing and became part of the larger cultural narrative.  Athletic prowess and shoe marketing combined to create a work of art.

Provenance:
This painting has never watched a slam dunk contest.  (yet)