My dad made this sculpture of a crow out of Velcro 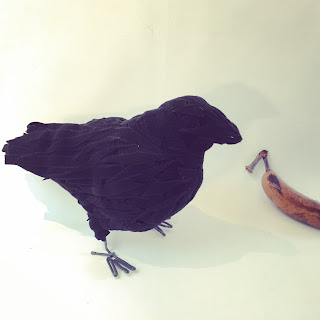 One thing led to another and in the mid 90s my dad became Canada's largest wholesaler of Velcro and he got invited to the Official Velcro factory in New Hampshire and was one of the first people in the whole world to see the new machine that was producing a brand new type of Velcro called "OneWrap" that he wasn't supposed to tell us about because of an NDA but we were only teenagers at the time and New Hampshire was a LONG way from our Velcro warehouse in Port Coquitlam before the internet but anyhow his company has sold thousands of miles of Velcro over the last 20 years.  In fact, one time he sold fire-rated OneWrap velcro straps to NASA and they went on the International Space Station.

He's moved away from day-to-day hawking Velcro and is now an art student at Emily Carr University and he's doing all sorts of different art projects but his main focus has always been sculpture.

And lo and behold, my pop combined his passion of sculpture, Velcro, Crows, AND puns to create this magnificent Velcro Crow sculpture accurately named VELCROW.

And now you can bid on it !

Provenance:
This VelCROW has sat in a Rubbermaid storage bin in several exciting locations and is currently on display in the One Red Paperclip Inc. factory where it deeply confuses Marley the Black Cat.